Owl with moving wings frightens birds and small animals away 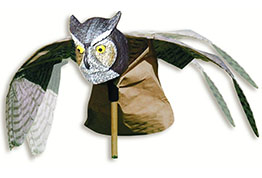 The Prowler Owl® decoy resembles the ultimate, most-feared aerial predator. In nature, the owl catches and eats almost anything that moves. Birds instinctually avoid the Prowler Owl®. Don't be fooled by imitations that just sit there! Our owl decoy sets up anywhere - the breeze and its natural appearance do the rest.